Holidays on La Palma? We are more than just a car rental!

Are you looking for a rental car for La Palma in the Canary Islands? La Palma 24 offers you rental cars in excellent condition from VW, Mercedes, Fiat and Suzuki for your stay on the island. You will benefit from a complete service including passenger insurance, unlimited mileage and long term car hire. Even in the event of a breakdown, our service will be there for you quickly. Pick-up and drop-off of the rental car at the airport or hotel is also possible without any problems. Rely on our more than 30 years of experience in the car rental sector on La Palma and let our qualified staff competently assist you in the three languages German, English and Spanish.

We can offer you the right rental car for your vacation on La Palma. Competent employees will advise you in three languages by phone or in our live chat.

Satisfied regular customers appreciate our fair prices for optimally maintained and clean rental cars. With us you do not run into a costs trap.

In the event of a breakdown or accident, we will be there for you 24 hours a day. Just call our emergency number and our team will assist you.

Our recipe of success is no secret - we will tell you why so many vacationers trust us again and again. Our success is your holiday pleasure.

If you are looking for cheap car hire in La Palma, La Palma 24 car hire is your reliable partner. Don't miss our special promotions for early bookings and special offers like rent & bid, where you can make a fair offer for your rental car for a low daily rate.

Questions about renting a car on La Palma? We have the answers.

La Palma 24 Car Rental wants to make your stay on the Canary Islands as pleasant and relaxing as possible. Thanks to our decades of experience, we know the questions our customers ask when they want to book a rental car. We have listed some of the most frequently asked questions about car hire on La Palma for you here. You will find more questions and answers in our FAQ section.

Where can I pick-up and return the car?

You can pick-up and return the car directly at the airport Santa Cruz de La Palma (SPC). This service is for our clients included in the rental price. Of course the pick-up is also possible in our office, at your holiday accommodation or on a different place.

How full is the tank when I pick up the car?

La Palma 24 clients can choose between the half-half and full-empty service. With the half-half regulation, you will get a rental car with at least half full tank and return it with the same amount of fuel.

How ist he car insured and what additional insurance options are available?

Included in the rent is a legal liability (the damage of third parties) in the amount of 50 million euro with full comprehensive cover CDW (Car Damage Waiver) - if required also with exempt from excess. You will find all the details regarding the conclusion of supplemental insurance due the time of your booking.

When and how do I have to pay the rental car?

Does La Palma 24 offer its clients a personal on-the-road-service?

Yes. La Palma 24 will never left you alone or in any of the dreaded telephone loops. In the event of a breakdown or accident, we will be there for you 24 hours a day. That is what our new name stands for. A call on our emergency call number is enough.

What do I have to do in case of an accident?

First of all: Don't Panic! Call us immediately. We speak English and make us on the way to you as well as we inform the police if necessary. We prepare on spot together with the police in Spanish the accident report. Our emergency telephone: 0034-637 55 97 62.

Take a look at our La Palma 24 Blog. Here we keep you up to date on air connections to the Spanish island as well as our regular special offers. You will also find valuable information about motorbike, e-bike and car rental on La Palma. This includes, for example, information on how to get there, the driving licence on La Palma or exciting routes for touring La Palma by motorbike.

We do not just rent car 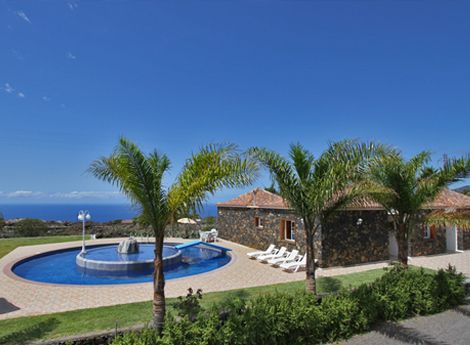 La Palma 24 rent a car was founded in 2002 with a fleet of 20 vehicles. Today, our car hire fleet comprises between 40 and 60 vehicles, depending on the season. Until 2015, we only operated in the car rental sector. In August 2015, we expanded our business to include the rental of bicycles and electric scooters, which are very popular with our guests.

Our office is located in the centre of the main tourist area in the sunny west of La Palma, in Los Llanos. Whether for holidays or longer stays, our qualified and trained staff will be happy to advise you personally on site, via our live chat or by telephone in German, English and Spanish.

More information about our company

Why is it worth renting a car on La Palma?

The Canary Islands, which belong to Spain, are situated about 445 kilometres off the northwest coast of Africa in the Atlantic Ocean. La Palma is the fifth largest and north-westernmost of the Canary Islands and belongs to the province of Santa Cruz de Tenerife. La Palma is also affectionately called "Isla Verde" or "Isla Bonita". This is mainly because it is the greenest of the 7 Canary Islands.

About 81,000 Palmeros and immigrants live on La Palma, which means that the island has about 120 inhabitants per square kilometre. In addition, the number of tourists has been growing steadily in recent years. However, in comparison to the islands of Tenerife, Gran Canaria and Lanzarote, La Palma is very quiet.

Explore the most beautiful island of the Canary Islands with the rental cars, motorbikes and e-bikes of La Palma 24.

With a rental car in La Palma, a motorbike or an e-bike, you can explore the Canary Island perfectly. For example, holidaymakers can easily reach the highest point of La Palma, the Roque de los Muchachos, with its impressive height of 2,426 metres. The hike up to this strange-looking volcanic peak is sometimes a bit adventurous, but well worth it. The view of one of the largest erosion craters in the world, but also the rock formations themselves, make the Roque a worthwhile destination during your holiday on La Palma.

Also worth seeing is the area of El Canal and Los Tilos, declared a biosphere reserve by UNESCO in 1983 and covering an area of approximately 511 hectares. It is also easy to reach this excursion destination by motorbike, e-bike or rental car on La Palma. The area was extended again in 1997 by some 138 square kilometres. Since 2002, its current size is approximately 807 square kilometres. Most of it is on the land mass of the island, while the rest is distributed among the marine protected areas surrounding La Palma. However, this is only a small part of the Canary Islands to explore.

So that you too can discover all the beauty and facets of the green island, we are your partner in the field of motorbike, e-bike and car rental on La Palma.

What are you waiting for?
Book your car hire in La Palma today at LP24 at the best price!

Appointments outside of the office opening hours are possible by prior request.

Here you can accept or reject the use of cookies through the configuration. If you allow the selection, it means that you accept that we use cookies for the purpose described.

These are cookies, which enable the website work properly. They are used, for example, to control the same cookie message or to be able to determine whether you want to log into our website or start a chat with us. The use of these cookies is only functional and does not serve to collect data.

We use Google Analytics to know the traffic and behavior of the users of our website. These analyzes receive various data, for example the device used to access the web (technology), the language, the geographic location, the tracking of clicks on the web (route map) or the origin (referenced web) from which you accessed into our website.